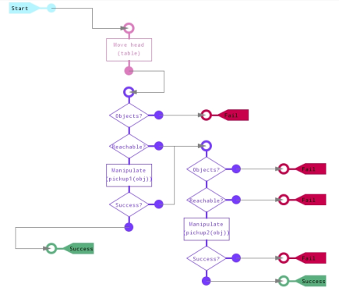 General-purpose robots can perform a range of useful tasks in human environments; however, programming them to robustly function in all possible environments that they might encounter is unfeasible. Instead, our research aims to develop robots that can be programmed by its end-users in their context of use, so that the robot needs to robustly function in only one particular environment. This requires intuitive ways in which end-users can program their robot. To that end, this paper contributes a flow-based visual programming language, called RoboFlow, that allows programming of generalizable mobile manipulation tasks. RoboFlow is designed to (i) ensure a robust low-level implementation of program procedures on a mobile manipulator, and (ii) restrict the high-level programming as much as possible to avoid user errors while enabling expressive programs that involve branching, looping, and nesting. We present an implementation of RoboFlow on a PR2 mobile manipulator and demonstrate the generalizability and error handling properties of RoboFlow programs on everyday mobile manipulation tasks in human environments.